January 02, 2014
Having just published Simple.Wpf.Terminal as a nuget package I wanted the ability to skin the user control - the more flexibility in the way it looks the more likely it will be used by other devs :)

Before getting into the detail, lets look at the solution working in the test harness for my WPF F# REPL Engine, shown below are four different themes applied dynamically at run-time - no recompilation required to change the theme: 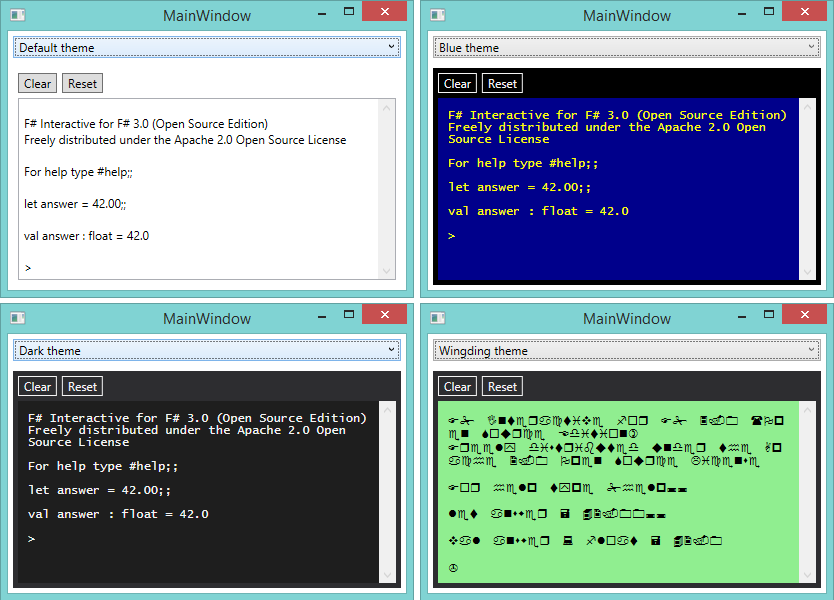 Previously in larger WPF apps I've relied upon third-party control vendors like Telerik to provide theming support. Typically they provide good solutions to the problem with multiple themes supported as standard, and when you're already using their third party controls the use of their themes makes sense. But when you're developing a small UI component you don't want to add (& support) such a large footprint just to add themes to your niche control.

A theme is a collection of Styles grouped into a ResourceDictionary in WPF. A Style can be applied to a control type, this is done either via the target type of via name (Key). Shown below is a very simple there with two styles defined, hopefully they are obvious but if not these two styles are targeting the Button & TextBlock controls:

How you apply the theme is what makes managing themes interesting, typically in an app which doesn't support changing the theme at run-time this would be done statically at compile time using XAML:

But this approach won't work when you want to be able to change the theme dynamically at run-time, you need to do this in code behind, and this is where a theme manager comes into play.

The solution I wanted was to provide a simple UI (combo box) allowing the user to select a theme which is then dynamically applied to the UI. The UI control manipulates a globally defined theme manager - defined globally as a static class:

These allow the setting, selecting and scoping of the theme you want to apply to the app. As stated earlier the actual manipulating was done using a theme manager class, this means you aren't required to use UI (combo box) to manage themes. The theme manager implementation is shown below, as you can see it's pretty straight forward manipulation of resource dictionaries:

The following example shows how I use the control in a code-behind approach - there's an MVVM approach included in the code base on github:

with the following code behind, note the use of the Theme class to bring to together the user friendly name and the actual URI of the resource dictionary:

and finally the following XAML definition:

Hopefully you can see you don't need to actually use the ThemeManager class directly, this is done for you by the Theme user control.

I've pushed the code up onto github and as a nuget package.