June 21, 2016
Not blogged for an age, and I received an email last week which provoked me back to life. It was a job spec for a WPF contract where they want help sorting out the performance of their app especially around grids and tabular data.

I thought I'd shared some tips & tricks I've picked up along the way, these aren't probably going to solve any issues you might be having directly, but they might point you in the right direction when trying to find and resolve performance issues with a WPF app.

First off, performance is something you shouldn't try and improve without evidence, and this means having evidence proving you've improved the performance - before & after metrics for example. Without this you're basically pissing into the wind, which can be fun from a developer point of view but bad for a project :)

So, what do I mean by 'Dispatcher thread performance'?

The 'dispatcher thread' or the 'UI thread' is probably the most important thread in any WPF app, and making sure this is working efficiently should be one of the primary concerns of any WPF developer, if not you'll end up in a situation which has prompted me back to life.

The code below doesn't improve efficiency, it allows you to observe when the dispatcher thread is overloaded with work, it has to much work to do in the time available, this manifests it's self as an application freezing & stalling for an end user - also known as 'white screen of death'.

So, how does this code work?

Very simply really, by using a dispatcher timer to tick every 333 ms, it will always fire every 333ms irrespective of anything else, but this doesn't mean the Tick handler will receive the event in a timely manner and this is the key point. If it doesn't receive the event in a timely manner it means the dispatcher thread is overloaded with work and can't refresh the UI quick enough. The Tick handler evaluates the delta between the current & previous times, and if this is greater than 500ms it will write out to console window (in VS or DebugView).

Example output from VS is shown below, this is using the publicly available WPF template project I use as a starting point for most apps. I've highlighted the line of interest: 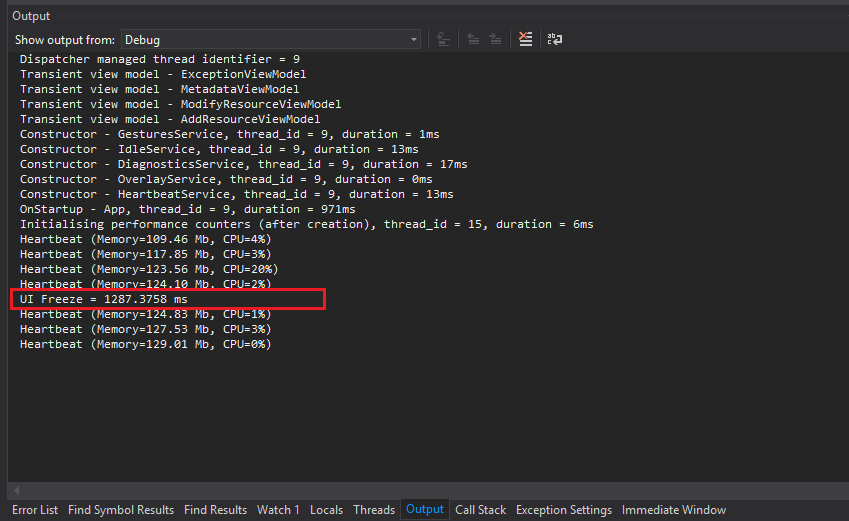 The output was forced by placing a Thread.Sleep call in the Refresh button handler in the ViewModel:

Hopefully you now see this gives an easy way to diagnose problems with overloading the dispatcher thread.