December 27, 2013
In this post I'm going to talk about the WPF user control I'm going to use to display the output from the F# Interactive executable, the previous posts (here & here) talked about manipulating the standard input & output streams of the executable to provide the following interface:

The control will render any values generated by the Output property on the interface, the property is an Rx stream which generates a new value when ever the F# Interactive executable outputs a line.

The control has basic REPL semantics - user enters a line of text, the line is executed and the output is printed to the screen. The F# Interactive window in Visual Studio is the implementation I'll be copying.

I had a look around and found 'WPF Terminal' on CodePlex it looked promising - fulfills the REPL requirements, until I realised it's using a TextBox for the rendeing. With a TextBox the text can only be one colour and I need the ability to show errors in a different colour. Also I wanted the ability to define the terminal prompt used.

I realised I needed to use a RichTextBox to get the UI behaviour I wanted, this meant writing my own control.

Before showing the key parts of the implementation, lets look at the finished control used in a couple of test apps: 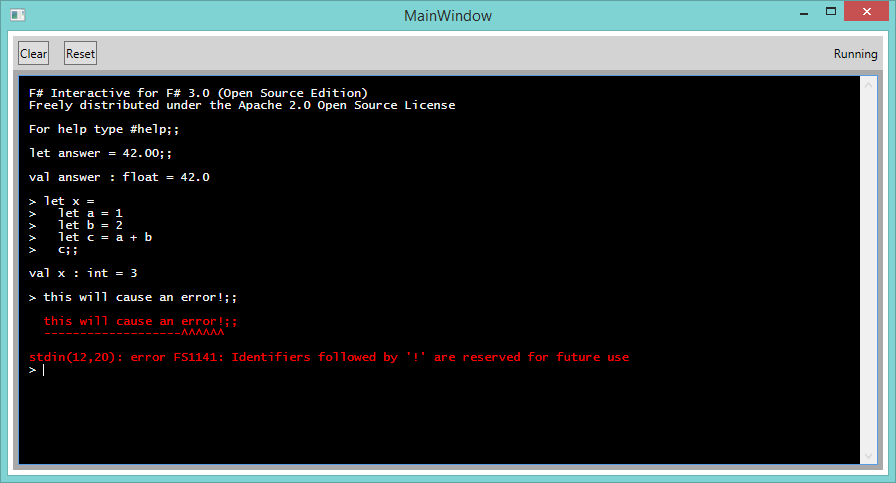 This has the following XAML definition, as you can see it's using several custom dependency properties, these are explained later:

Another example used as a log window (inside a WPF app):

And this has the following XAML definition:

Hopefully it's obvious looking at these two different uses that there isn't any implementation inside the control apart from how to show the bound data (ItemsSource property) - the control only deals with UI concerns, as any View in an MVC implementation should only do.

As I said earlier, this control derives from RichTextBox, the derived class 'Terminal' defines the following event & dependancy properties - you can see some of these used in the above XAML screenshots:

Hopefully the use and behaviour of these is obvious, but if not the most important three are:

LineEntered - event is fired when ever the user press the Enter key,

ItemsSource - data displayed above the Line, this would be a collection implementing the IEnumerable interface, you can define the ItemDisplayPath if you're binding a complex type not a simple type (string).

I'm not going to show the complete implementation because it's over 600 lines, but the most important method is the intercepting of every key press using the override OnPreviewKeyDown. This allows the control to prevent or allow certain key presses: 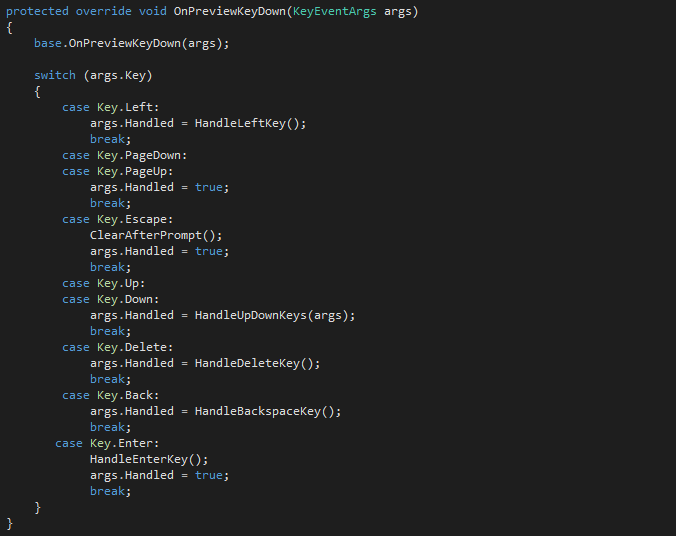 When dealing with a RichTextBox you have to understand the content you see on the screen isn't what you're going to manipulate when you're trying to add, remove or edit content.  You do this using instances of a TextPointer - they represent a position within in the FlowDocument of the RichTextBox.

The constructor is shown below, as you can see I'm creating the FlowDocument with a Paragraph, it then adds a Run which represents the Prompt in the UI, doing this allows the manipulation of the content later. This is because from a terminal window point of view the text entered after prompt is the important part:

The following screenshot shows the delete key handler, it's probably the simplest key handler in the control, all it does is compare the current caret position to the end of the prompt and if it is greater than the caret then the delete key can be processed:

I've pushed the code into the wild as both a GitHub repo and as a nuget package.

In the next part of this series I'll bring it all together in an MVVM based solution.

Note: The F# Interactive screen shot was taken from the Simple.Wpf.FSharp.Repl GitHub repo.

Note: The log window screen shot was taken from the Simple.Wpf.Composition GitHub repo, select 'Logging Workspace' from the drop down and click Add.