December 19, 2013
In the first post I've managed to abstract the use of the F# interactive process behind an interface - it can now be used from an .net application:

The goal of the abstraction was to make it easy to use and I believe it has, but after reviewing the interface and implementation there will be responsiveness problems when I try and use it in an actual WPF UI.

I reckon this because the F# interactive process is running 'out of process' and the fact that any script I want to execute has to be written to the input stream and then interpreted & executed. This means there's going to be an appreciable delay in the responsiveness of the UI - a delay long enough to be observed by the user or at worst allow the user to enter another script before the previous has been executed and therefore screw up the output.

This can be observed in the console test harness as well, if I enter text before the initial setup has been completed it screws up an error - I've highlighted the text and the error it generated:

In a UI based application you typically disable controls when you want to prevent the user from entering text (data) when it's not applicable - using XAML framework properties like IsEnabled or IsReadOnly.

Exposing information to manipulate the XAML properties will be key to preventing user input at the wrong times during the engine execution cycle. Currently the interface doesn't expose any information about the current state of the F# interactive process - the name of the interface should have given me a clue, it contains the word 'engine'. Engines usually have a set of predefined states - stopped, starting, stated, idling etc.

I need to expose state of the REPL engine through the interface - this will allow me to enable\disable controls in any WPF UI. I've decided on the following states and these are exposed via an IObservable<state> property on the interface called 'State':

The observable property will pump when ever there is a state change in the engine and this will allow any UI to do what ever it wants when a state transition occurs. Implementing this in the engine is easy, in fact it improves the implementation because the control flow is easier to understand, shown below is the implementation of the Stop method:

Hooking this new property up in the console test harness is easy: 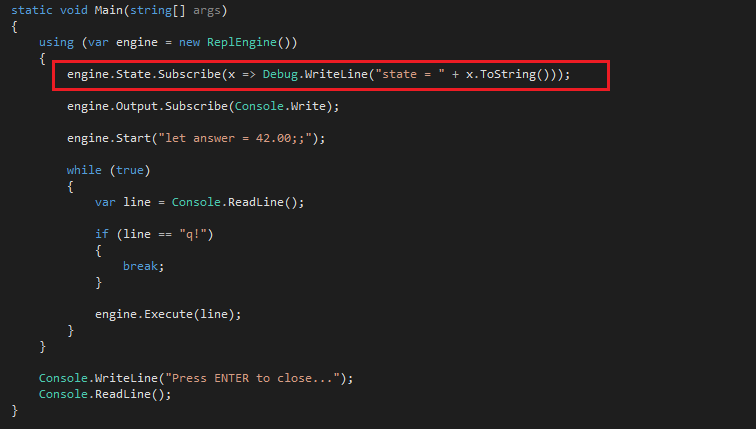 When running this produces the following results in the output window of visual studio: 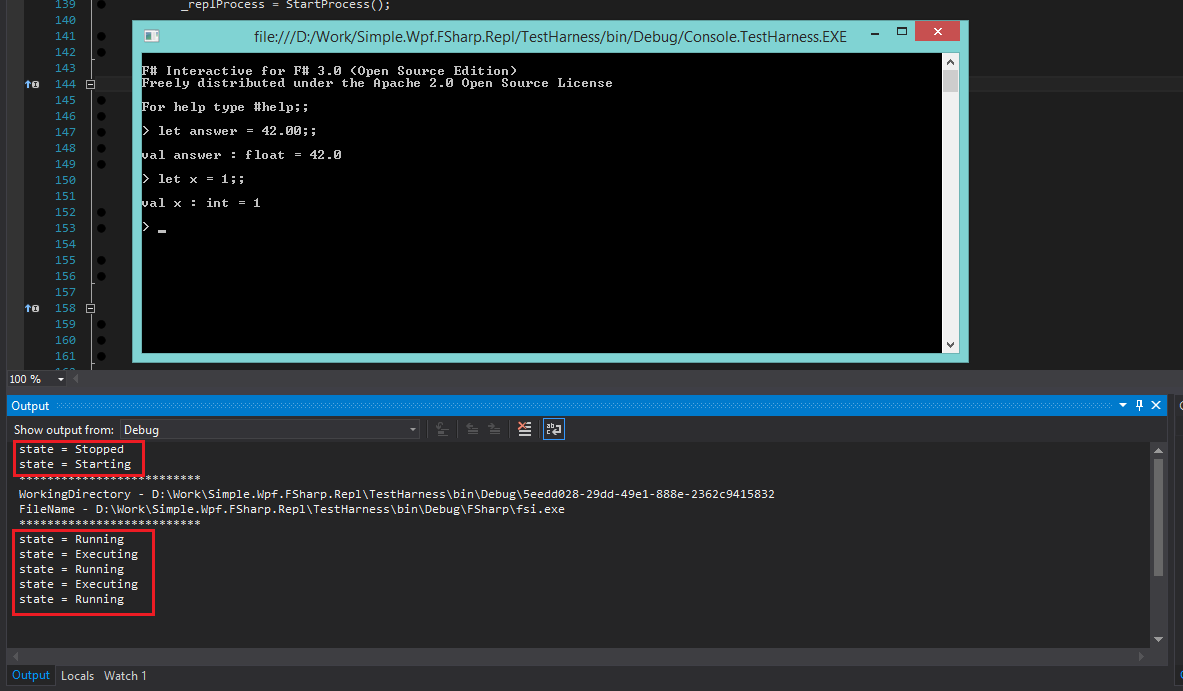 The future WPF UI will disable the ability to execute a script while the state is not equal to 'Running'.

In the next post I'll actually get around to using the implementation in WPF :)