December 15, 2013
I'm currently working on a C# WPF app which makes use of F# as a modelling language to dynamically create data points from static data in the system. The user enters the F# in the UI via a code editor window, it is then validated & compiled by back-end services for use in reporting & charting views. This all works well but the feedback loop is rather long - instead of being seconds it can take a couple of minutes! What would be nice is a REPL window in the UI, which would allow the user to test the F# code snippet they've just created without having to communicate with the back-end services.

What follows is the first in a set of posts (not sure how many there will be) in the creating of a simple F# REPL UI for use in an WPF app - the end goal is to be able to include a WPF user control in a XAML data template.

The F# interactive window in Visual Studio is done using the fsi.exe executable, this functionality is what I want to achieve in any WPF app - the ability for the user to enter some F# code and execute and get the results displayed immediately.

The F# interactive (fsi.exe) executable provide in visual studio is own & copyrighted by Mircosoft so using this is out of the question. Fortunately F# has been open sourced and is available here - I'll be using the latest version of the F# code base (v3.0).

Shown below is the F# interactive window from visual studio, and as you can I see I've enter a simple F# expression which has been executed  - let answer = 42.00;;

I'm using Reactive Extensions to expose the output from the F# interactive executable to the host app. Hopefully the interface is self explanatory - but if not, the idea is you will start the F# REPL engine and then 'Execute' F# scripts, and you observe any output via the Rx stream exposed as the 'Output' property.

The input stream is used as follows - the stream used to send text input to the process:

Using the output stream is a little more complicated because reading a line of text from the process is a blocking operation in v4.0 of .net  - a simple extension method gets around this issue:

As you can see this is an infinite loop - it will block the calling thread until the cancel is called on the CancellationTokenSource. To avoid this the code is executed asynchronously using the Rx method Observable.Start, below is the complete method block for reading the output stream: 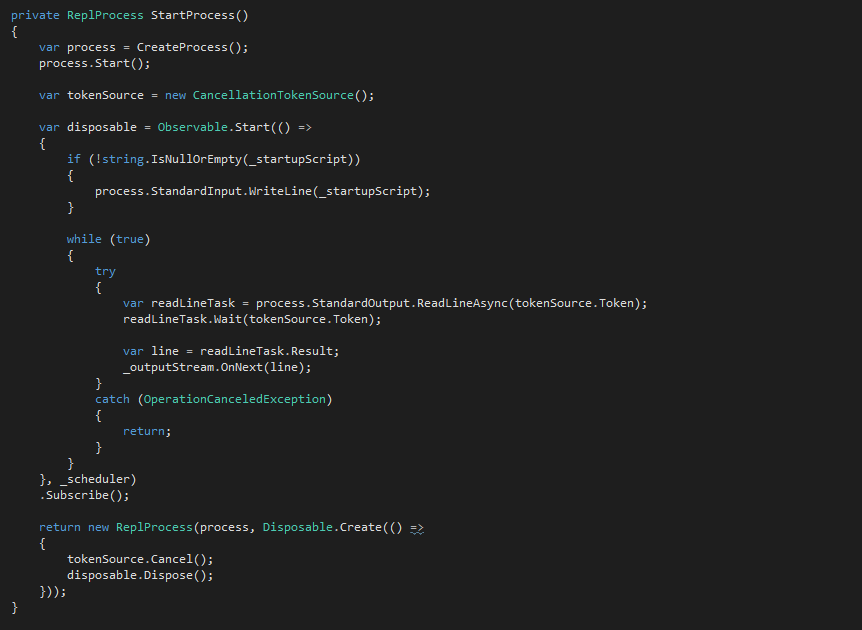 The complete REPL engine is shown below, the F# interactive process is created on the calling thread with the output stream observed on a task pool thread using Rx. There is logic to safely shutdown process & background thread.  The API isn't designed to be thread-safe as I'll be using this in a WPF app and it will only be called from the UI (dispatcher) thread.

Loading ....
The required F# interactive binaries will be added as a 'solution folder' because I couldn't find a relevant nuget package - hopefully I've just not been able to find it: Testing this is now easy in a simple console test harness, it's a bit strange to use a console app to test another console app which has been wrapped behind an interface but it demonstrates perfectly how easy this will be from WPF:
Loading ....
With output looking very similar to the F# interactive executable, the only difference is the name of the executable in the title bar:

I've pushed the code up onto github, I'll be adding the WPF parts to the code base over the next couple of posts.