Bar is defined as follows, the implementation is irrelevant as it being mocked for the tests:

So I wanted to put Timeout & Retry under test, to do this we use moq for mocking out our dependencies, we also use nCrunch for continuous testing, you'll see this in the screenshots below as the red\green icons on the left-hand side of the code - these icons tell me where the code is failing etc..


As you can see two identical tests, asserting on different behaviours of the FooService, you'll notice the constructor of the FooService is being injected with an instance of the BarService, this is being created as Mock<T> of the IBarService interface.

You'll also notice the use of the MS TestScheduler for Rx, essential for unit testing anything in Rx.

So my first attempt at mocking this out looked like this:


When the tests were run I didn't expected either of the tests to fail, but what I got was one successful & one failed test! The Timeout had worked but the Retry schedule hadn't! 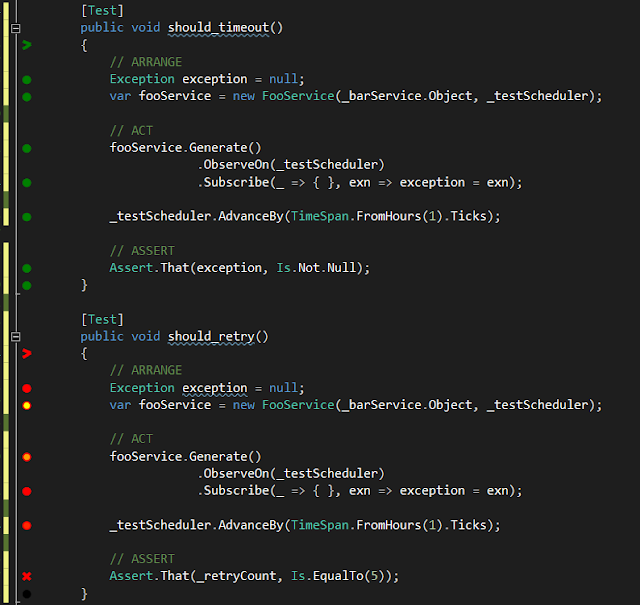 My initial thought was I hadn't passed the scheduler to the Rx Retry method in the FooService implementation, but after checking I realised it doesn't need take the scheduler so the problem must be with the test setup. To be more precise the problem must have been with what was being returned for the mocked Generate method on the IBarService.


The change is subtle but makes a big difference when testing: 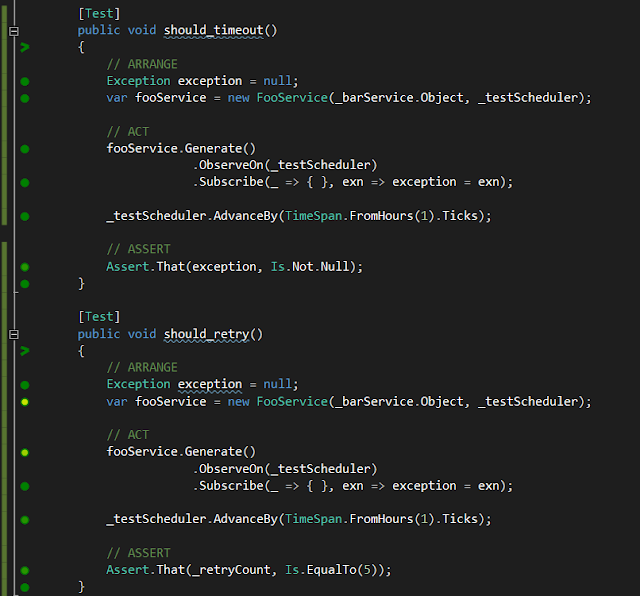 Looking at the decompiled code it tells me why, the Retry extension method is using the Catch extension method to replace the faulted source stream with another, it just so happens that happens to be the source stream, so therefore from a mocking point of view you need to make sure that every time the Return Func is executed it creates a valid non-faulted stream.