October 17, 2012
When using WebAPI inside a test fixture make sure you shutdown the HttpSelfHostServer instance correctly or your tests will more than likely fail when run from a continuous testing framework like nCrunch.

See this post for info about using the self hosting version of WebAPI inside a test fixture.

So my tests were running successfully when run inside Visual Studio from either the inbuilt runner or via Reshaper, but were failing when run from nCrunch: 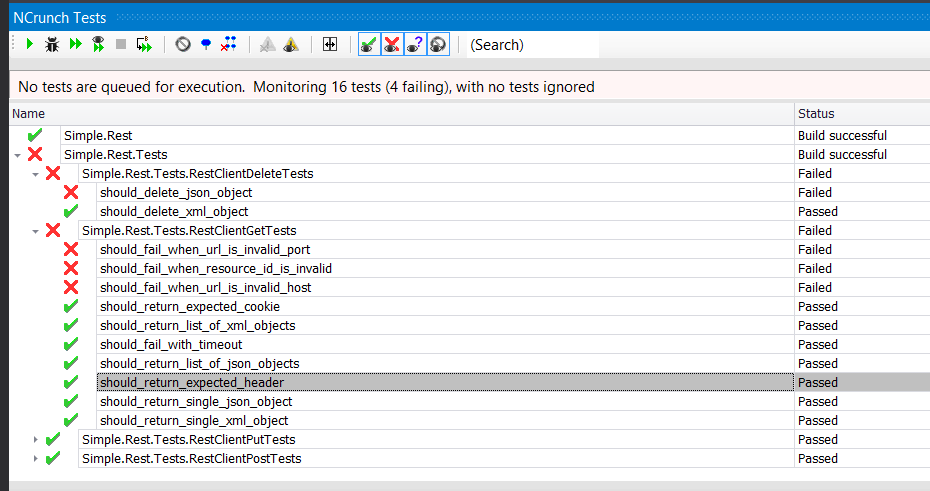 What the tests had in common was they were using a shared resource setup inside the test fixture setup method - this is like the setup method for a test but scoped at the class (test fixture) level. The setup was failing randomly were it was setting up the WebAPI self host - see highlighted yellow area, you can see the failing icon for nCrunch at the side:

The exception was telling me it was trying to create an instance of the service on a port already assigned:

But after debugging the code with breakpoints for the SetUp & TearDown it appears this was wrong, these methods were only called once per run. This meant the service wasn't shutting down correctly when test execution had completed.

The TestService class is shown below. I thought I was shutting down the WebAPI host correctly by calling Dispose in the class Dispose method:


But this wasn't the case, after changing to the following all tests were passing as expected:


I had to re-initialising nCrunch to force any remaining service instances to shutdown:

I hope this helps if you run into this issue :)