I no longer build C# apps

June 24, 2012
Okay so the title is slightly misleading, I'm still writing code in C# (.Net) but I'm no longer manually building the solution inside Visual Studio, no F5, no Ctrl+Shift+B...

What I mean is I no longer go round the continual cycle of write code, compile code, test code, refactor code etc. We've managed to remove the compile & test phases from the development process and I can't elaborate how liberating this is.

This has been achieved by using a continuous testing framework - tests are executed as you write the code. I found this article back from 2007 stating all the benefits you'll get from using such a framework - 'It’s turning the knob on Test Driven Development up to 11' - so true...

I'm currently working in an environment where the main constraint is not the tools we're using but the underlying OS. We're stuck with 32 bit Win XP machines for at least the short to medium term and our biggest problem is Out of Memory exceptions when compiling the code-base. This is 'by design' apparently, I understand why this is happening but it's still damn annoying and we wanted a way to reduce it. This is where I've found a continuous testing framework and an external triggered build process has really helped to reduce the number of OOM exceptions. Put simple the number of full builds has been reduced and therefore the number of OOM exceptions has also been reduced...

So which continuous testing framework are you using?

nCrunch developed by Remco Mulder, it's currently free whilst in beta.

The only other product I know about right now is Mighty Moose (by Greg Young of DDD fame). Previous to nCrunch I would have used DotCover to runs tests manually, but this has now been un-installed - I did hear on the grape vine that JetBrains are planning to have something out in the new year, hopefully dotCover will be upgraded. nCrunch doesn't currently support Silverlight which isn't a problem as we're using Project Linker to target the code base for both WPF & Silverlight platforms - nCrunch is automatically covering all the tests in the WPF (desktop).

nCrunch has everything I need, using the code from my previous post about Rx and the RefCount operator, these are the features and windows I'm currently using:

Syntax highlighting - you can see from the following screenshot the code is annotated with coloured icons on the left hand side:

Black indicates code not under test:

The above black indicator shows there aren't any tests that are subscribing to the Listen method and receiving updates.

Red indicates code that failed as part of a one or more tests:

Tests are also annotated with icons on the left, but this time the failing line is highlighted with a red 'x':, hovering over the icon gives details of why the test failed - As you can see nCrunch has support for MSpec as well: 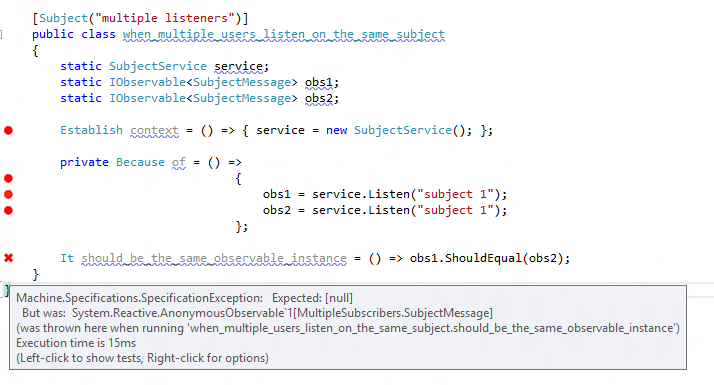 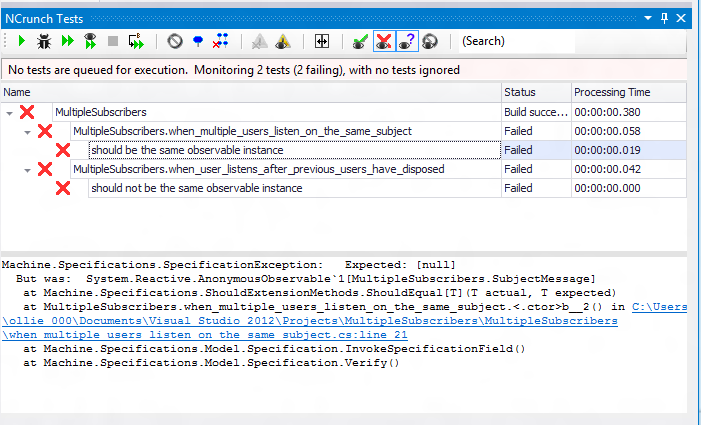 It can also show passing tests:

Metrics Window - Allowing me to see where coverage is missing - a higher level view of the info provided whena file is open in Visual Studio:

Risk/Progress Window - not quite sure yet of the full benefit, but it does give a nice big binary (red\green) status of all the tests:

As I said at the start I'm no longer building the code manually this happens all automatically, the only time I ever hit F5 how is to run up the app to investigate a particular test problem...

A big shout out to @HamishDotNet for introducing us to nCrunch and also to @LordHanson for sorting out the external build process...