Getting app feedback from windowsphone.com

December 01, 2011
I was chatting with my good friend Denis (@dhaman) about user feedback for the apps he's produced for the iPhone & droid app stores and just like the WP7 app store they all fall short in supporting your app once released out into the wild. I was also reading the final post in the '31 days of mango...' by @jeffblankenburg and he talks about promoting your app, he mentions the great work Nick (@spacescape) did originally for FINDaPAD in producing a template you can use to provide a bespoke site for WP7 app - Nick pushed this out to codeplex here.

Denis pointed out he started to explicitly put a feedback mechanism in the app blurb, ideally at the top. Initially I thought I don't need this, we've got http://findapad.biz with feedback via uservoice, but then I realised there isn't any way for a user viewing FINDaPAD in the app store to get in touch with us. This is a piece of functionality that should be in the app store and I don't mean a forum like feature to discuss the review\rating by a dissatisified user (1 star rating for FINDaPAD) I mean the ability to provide a contact point for any user to talk to you.

As you can see from the screenshot below they don't even provide anyway to show a support URL or email. I would have expected something down the left hand-side. 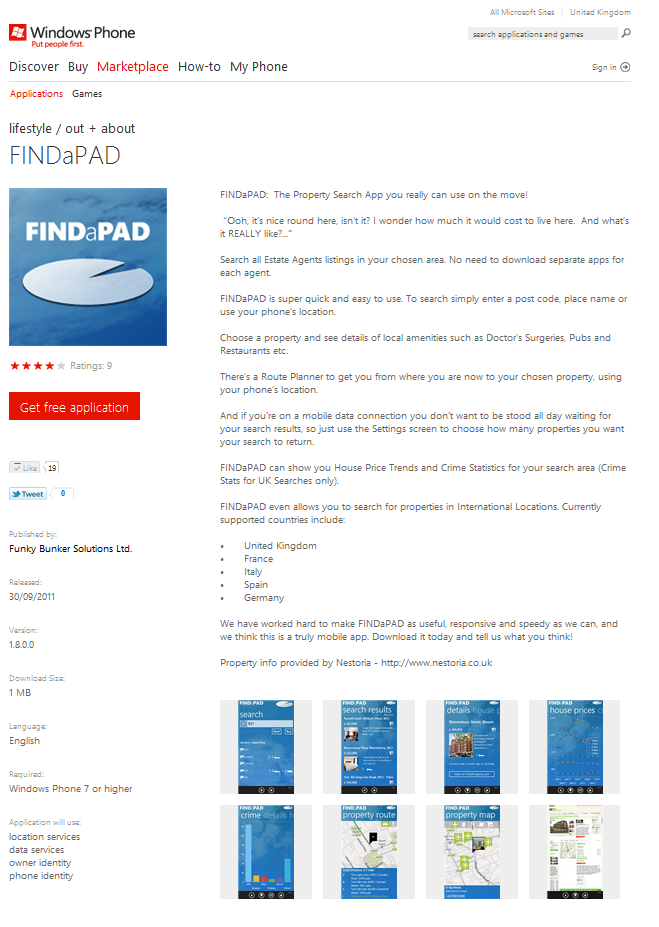 I don't really expect the app store to get a make over until Windows 8 platform is released (including to the phone). So what I am going to do to help us get better feedback in the mean time is put an explicit message in the blurb. Something like:

'We really want to hear from you, get in touch via feedback @ http://findapad.biz'

Now where this should be positioned is the difficult question, I'll try near the bottom at first and see what happens.