July 23, 2011
Rich and I are currently working on a WP7 application based around local content stored on the device.  This content consists of a database and a set of flat files per logical item.  The content for the application can contain many of these logical items; this is determined by the user when purchasing the application.  The content is either installed along with the application at purchase or is downloaded afterwards. The application is completely self-contained and read-only – it doesn't allow modification of content.
The application in theory has n number of these logical items; each logical item is queried for a set of data.  This data consists of information extracted from a database and flat files.  Once the data has been extracted it is then mapped into the required model.  This process could be repeated n number of times whilst the application is being used.  There is a time penalty in accessing the flat files & database to get the data.
This process is an ideal candidate for use with a caching strategy – read once and store in cache.
WP7Contrib has a defined caching strategy with several implementations, the main two being isolated storage cache provider and in memory cache provider. The first is a persistent-cache backed by isolated storage so it will survive application restarts; the other is an in-memory-only implementation which is transient and does not support application restarts.  The class diagram is shown below: 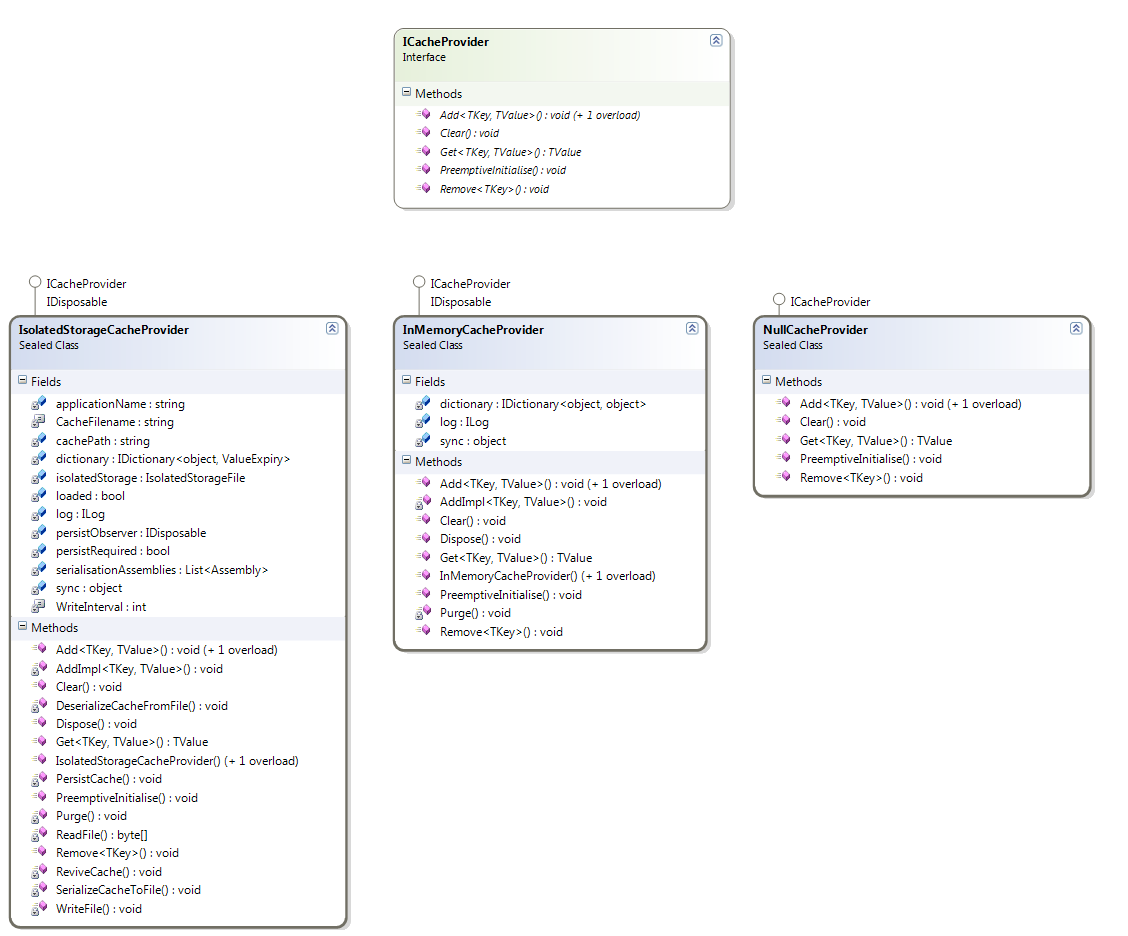 We decided to use the in-memory cache provider for this application because if we had used the isolated storage implementation we would have been extracting from one format (flat file & database) to be stored in a different format (serialized objects) in a file in isolated storage.  Adding the required serialization support to the model can be a fiddly task prone with un-intelligible exceptions when it doesn’t work.  This is true irrespective of the serialization framework you use.  In addition to this, you will still have to access the flat file and database periodically anyway, so why add the overhead?
The in-memory cache provider is a very simple implementation; it uses a Dictionary class internally with a timer to remove items once they have expired.  It is thread-safe and does not use weak references for items in the dictionary so items will not expire unexpectedly.
You will also notice from the above diagram a cache provider called NullCacheProvider.  This is as the name suggests an implementation of the ICacheProvider interface that does not do anything!  It follows the ‘Null Object Pattern’.  We use it when a component defines dependency on the ICacheProvider interface but we don’t wish to use caching, and also for measuring and testing caching implementation performance.